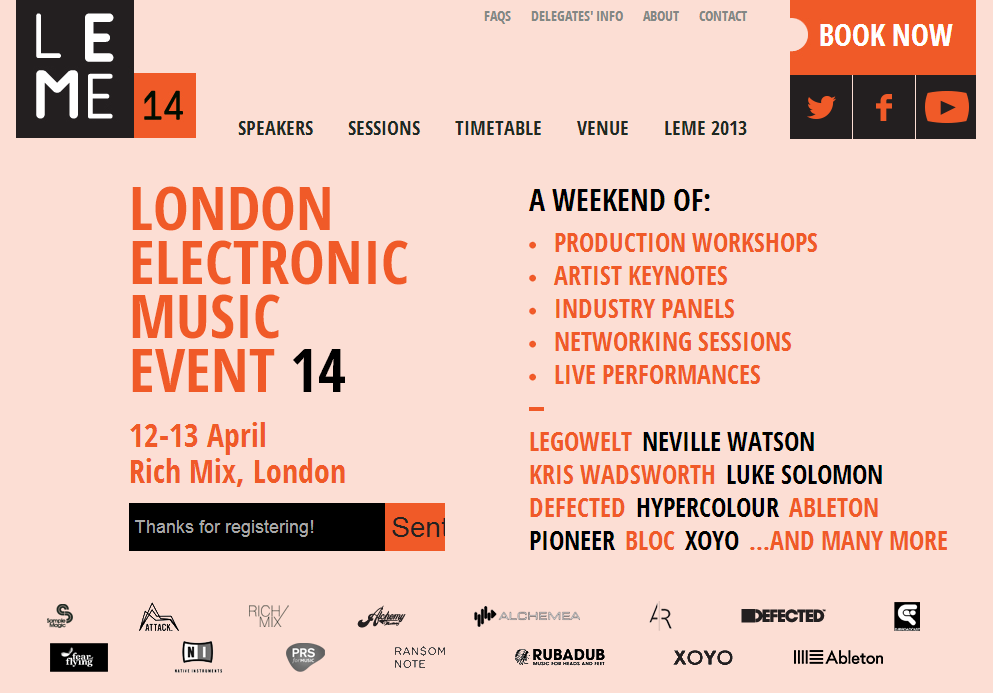 Events like this don’t come often so the London Electronic Music Event (LEME) was an opportunity for me to learn a brad but core understanding of the technical and business side to the electronic music scene.

Based just round the corner from the Shoreditch underground – Rich Mix – capacitates quite a large volume of people. The venue was fitting, nobody really struggled for space and acoustically, the sound was spot on. The only problem we encountered in terms of sound was during Matt Colton’s talk – former mastering engineer of year. Sonically, it would have been rather difficult to arrange an ideal surrounding for such a high volume of people butn to be honest it wasn’t that bad. Sound was the only point during the weekend that I though could have been improve.

The Saturday seemed to be focussed on the production side to the scene. Talks on Mastering in the box, creating house classics and sequencing using Ableton we’re all brilliant. The right balance in terms introducing amateurs yet delving into enough detail to satisfy the more experienced was definitely reached. The highlight for me, across the weekend, was ‘In The Studio with Legowelt’. The man had such an interesting perspective to life and clearly represents his productions. With such a dry humour he somewhat deterred the interviewer off topic and his development into such a prolific producer stemmed from a real obsession with synthesisers; something that seems to be the common denominator with all producers.

Sunday was intensely targeted to the business side. With a talk on Social Media from Ben Gomori to open the day it was obvious from the set that a sort of physical presence is essential for anyone wanting to get their productions heard. However, again it was the live set from Karenn AKA Blawan and Pariah that topped off such a great weekend. You tend not to focus on the actual technique when you see deejays perform in a live setting so it was so helpful to see such prolific producers intimately show of their skills on the ones and twos.

Overall, LEME provided exactly what they aimed to since they first launched – a physical and more real platform for the electronic music scene to interact, learn, play and discover. Will definitely be in attendance next year.

Monday's just come round the corner again, but thankfully, Easter Monday means that I have a bank holiday today. And what...
The Vibe Guide Privacy Policy
Back to top