It is difficult to believe it is now 8 years since Little Dragon first announced themselves into the pubic consciousness with their first single ‘Twice’. Since then they have released three albums and collaborated with Gorillaz and SBTRKT to name just two. Now Little Dragon Return with their fourth studio album Nambuma Rubberband. It has been three years since the third of these albums, Ritual Union was released. Little Dragon’s sound is unique, it is difficult to house them with any other contemporary artists, partially this is due to lead singer Yukimi Nagano’s vocals and also the blend of genre’s they create sits somewhere between electronic, dance, R&B and world music and even that does not come close to describing their actual sound.

Their fanbase has steadily grown over the last decade and they now find themselves headlining Secret Garden Party in Cambridgeshire in the UK as well as wide range of dates in the US and across Europe culminating in a UK tour in November.

Yukimi claims that the album was inspired by “Janet Jackson slow jams” and this is immediately obvious with album opener ‘Mirror’ the tempo is glacial and ethereal and this feels like new territory for the band after the Dance orientated sound that has dominated their previous two albums.  Familiarity returns with second track and first single ‘Klapp Klapp’ but is short lived as the tempo is reduced again for ‘Pretty Girls'; ‘Underbart’, a synth epic laced with Yukimi’s mournful vocals, and Cat Rider. Track 6 comes in the shape of second single ‘Paris’ (see the official video above) recently premièred as Zane Lowe’s Hottest Record in the world a track reminiscent of early M83, especially with the French vocal samples at the end of the track.

The slower sound does come a bit of a shock  for those familiar to Little Dragon’s sound. If you were expecting a more upbeat dancier sound then the idea of an album consisting of low jams might be a trudge. However there is enough variation in the tracks to keep the listener engaged. The second half of the album does offer a fair amount of variation ‘Killing Me’ is a gritty electro jam whilst ‘Pink Cloud’ offers a sample of R&B. The Album’s last track ‘Let Go’ is the third of a trio of previously heard tracks and closes the album with a flurry of sound.

Overall the album does continue to build Little Dragon’s legacy as a great underground band, it seems difficult to see them breaking onto the mainstream radio playlists with many if any of the tracks. Perhaps too much emphasis may have been put on creating a different sound to what went before but it is obvious how much of their soul they have poured into this record to fault them for that. 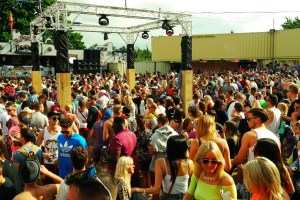 If you're looking for an effortlessly cool one-day festival, Eastern Electrics is your go-to event. Past attendees (including...
The Vibe Guide 2012-2014 Privacy Policy
Back to top