It’s easy to shun Thomston as another middling singer and songwriter. We live in a culture where Soundcloud plays and Facebook likes form a vital role in our opinions. If there’s one thing I’ve learnt though – it’s that it sometimes takes more than one listen to fall in love with some records. Just because it hasn’t been rinsed to aggravating levels of ubiquity, doesn’t mean that it should be ignored.

‘Midas’ is exactly one of those songs. It may need more of your attention to realise that Thomston is a talented individual, but then again, he’s a young artist that isn’t drowning in major label prosperity. A quivering breakbeat-like clap sits beneath orchestral slums which are coveted by almost gasping vocals that arguably follow in the footsteps of The Weeknd. His production is swallowed by a revved-up James Blake-esque glee marking him as an artist you should probably drown in highlighter ink. 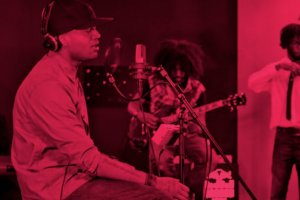 If you're looking to warm up for spring, then check out these upbeat vibes from Sash_S & Ian Storm's remix of Mr Probz...
The Vibe Guide 2012-2014 Privacy Policy
Back to top